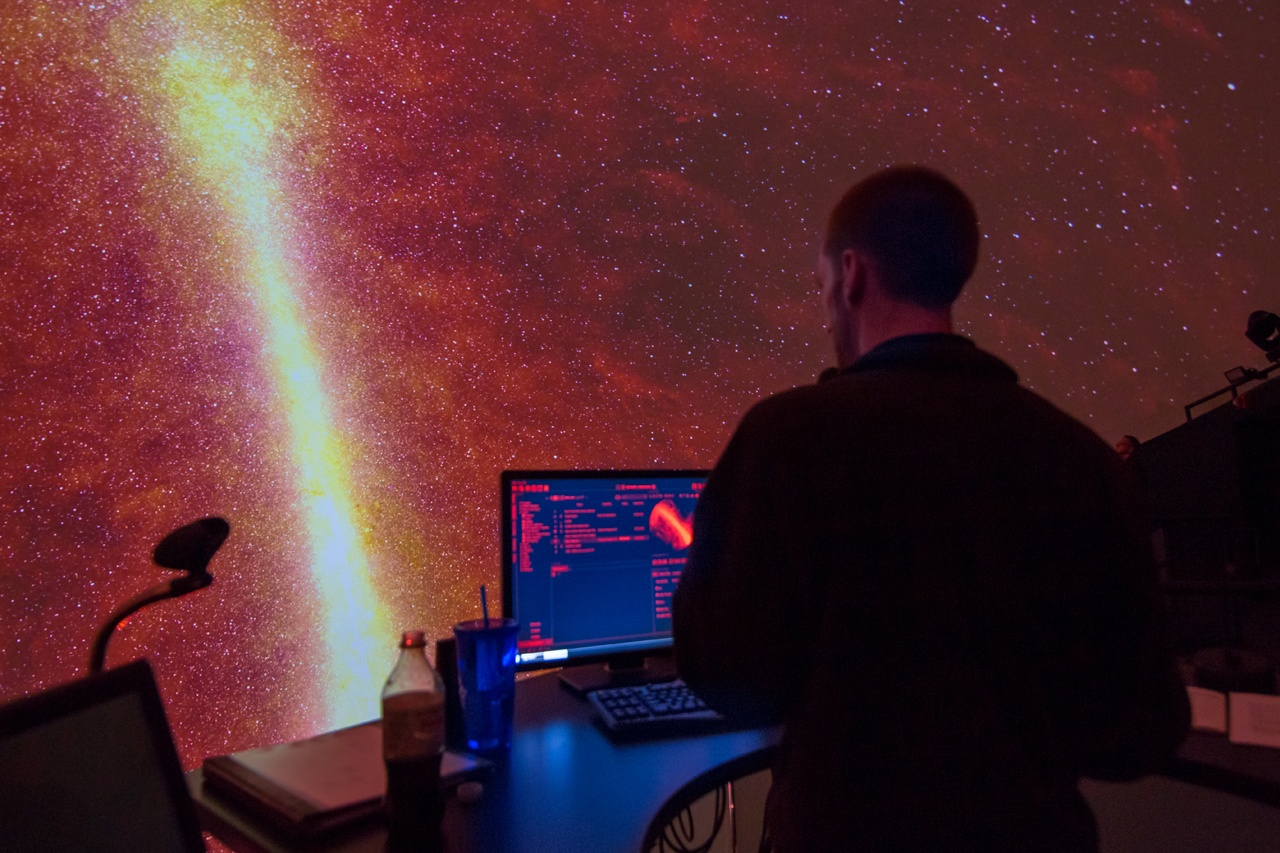 On October 22, 2014, the Giant Screen Cinema Association sponsored a digital dome demonstration at the Science Museum of Virginia in Richmond, VA. Early this year, Evans & Sutherland installed an 8K resolution digital fulldome system to replace their existing 1570 giant screen film system. The museum has been running their new digital system since March 15, 2015. This event was an opportunity for over 50 delegates to evaluate the quality of the 8K resolution digital system and compare it directly to the 1570 film system. Glenn Shaver, Director of Featured Products, OMNIMAX and AV Operations at the Ontario Science Center, served as the day’s master of ceremonies. For the first two-and-a-half hours, the Digistar 5 system displayed a variety of content, including some technical demonstrations that had never been done before.

The morning demos started with two fast-paced fulldome montages that highlighted the diversity of content in the fulldome medium. The first was the 2014 Sizzle Reel produced by IMERSA, a non-profit organization devoted to the development of immersive media, and the second was the 2014 E&S Content Montage featuring fulldome shows distributed by Evans & Sutherland. Both pieces included native fulldome content that filled the entire 180° dome hemisphere and giant screen 4:3 content converted to cover about 75% of the dome.

Next, in a history-making, first-of-its-kind technical presentation, the Digistar system synchronized with 1570 film and both film and digital played simultaneously: the imagery split in half vertically on the dome thanks to a custom lens cap for the film projector that only output light on the left side of the dome and video projector shutters that only allowed video to project on the right side of the dome. This split screen demo allowed the attendees to see film and digital go head-to-head on the dome for the first time in history. The demo started with the dome grid created by Imagica for proper dome framing in 1570 film (illustrating the nearly identical image warping in film and digital projection. This was followed by 4 giant screen film trailers: Flying Monsters (from National Geographic), Space Junk (from Melrae Pictures), Pandas: The Journey Home (from National Geographic), and Sea Rex (from 3D Entertainment Distribution). Then the lens cap came off and the digital projectors’ shutters were opened to allow the same sequence to be shown completely digitally and then again in 1570 film across the dome. Delegates agreed nearly overwhelmingly that the 4 foot lamberts of brightness of the digital imagery rivaled or exceeded the quality of 1570 film on the dome. 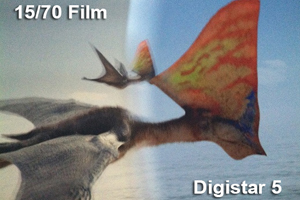 Next, James Neihouse presented a collection of shots captured in 65 mm film and via a number of 4K digital cameras, mastered in 4K x 3K, and then warped for digital dome projection. These shots were all photographed by Neihouse himself as part of the GSCA Technical Committee’s “Bring Back Our Wide Shots” initiative, designed to show the current state-of-the-art in digital live action capture technology. This footage was not image-enhanced or “uprezzed” for the dome, but rather presented unretouched so the audience could most accurately compare the results each digital camera produced natively.

Next, E&S screened a series of scenes produced natively in 8K x 8K resolution at 60 frames per second. Then, in another history-making presentation, 1570 film footage, scanned digitally at 8K x 6K resolution screened in its native resolution. All other digitized film clips screened up to this point had been mastered at 4K x 3K and then presented on the 8K fulldome system; however the trailer for “Alaska: Spirit of the Wild” and a one minute clip from the film “Bears” screened in 8K.

E&S then demonstrated a number of techniques for warping 4:3 aspect ratio imagery originally produced for a flat screen so that it could be displayed on a fulldome system. The first warping technique most closely replicated the standard warping produced by a fisheye lens on a 1570 projector, often represented by the Imagica dome grid or “sacred master” as demonstrated earlier in the morning during the side-by-side comparison of 1570 film and fulldome digital. This warping covered an area about 180° wide and 130° high on the dome screen. The second technique, the expanded film warp, demonstrated a slightly wider field of view offering a bit more image coverage on the dome, both in width and height. Finally, the E&S Patented Warp, covered a much wider and taller area on the dome, creating a greater sense of immersion, with imagery covering about 80% of the dome. Rather than one option for presenting flat screen 4:3 content on the dome, E&S offered a variety of solutions, showing another way that digital offers more flexibility than film.

In the day’s first of two panel discussions, Paul Fraser of Blaze Digital Cinema Works hosted a session about digital convergence, or the combining of two markets, fulldome planetariums and giant screen dome theaters on the same digital fulldome systems. Theater panelists included Craig Blower from the Reuben H. Fleet Science Center in San Diego, CA; Gary Monti from the Cradle of Aviation Museum in East Garden City, NY; and Terri Rose, one of our hosts, from the Science Museum of Virginia. The distribution panel included Michael Daut from Evans & Sutherland and Annette Sotheran-Barnett from Sky-Skan.

After lunch, delegates moved back into the dome for a demonstration of real time astronomy programming, presented by SMV’s own master-presenter Justin Bartel and his sidekick, Perbir, who canvassed the audience with a wireless microphone to draw them into the show. This energetic youth-targeted show revealed just how compelling a live planetarium presentation can be as the audience was treated to astronomical images captured across all wavelengths in the electromagnetic spectrum and a very funny “Space Password” game played by two members of the audience. This real time toolkit demonstrated the extended capabilities and flexibility of a digital fulldome system that could do much more than play digital films.

Next up was the final panel discussion of the day, moderated by Toby Mensforth of Mensforth and Associates, and Event Network, focused on the new realities of digital content. With 1570 film theaters, the ecosystem had always been rather small, with film content as the only material that could feed the projection system. Theater operators selected between a finite list of film titles that they could program for their dome screen. Now with digital content and the versatility of digital fulldome systems, virtually anything can be presented on a dome, opening the door for nearly infinite programming opportunities, not all of which will work or make sense, but some could pull in audiences in ways that 1570 film productions may not be able to do. Panelists included Ryan Wyatt from the California Academy of Science, Ian McLennan from McLennan Consulting, and Michael Daut from E&S.

“As far as I know this is the first time 1570 film’s been compared ‘side-by-side’ to Digital on a dome. This GSCA event was another industry benchmark, equivalent to when 4K was compared to 1570 on a flat screen. I have to say that I was very impressed at how well the digital image showed compared against the selection of 1570 film screened. For me there was not a noticeable difference and I thought that the content that was originated in film showcased almost the same in both formats. There was little to choose between the two. Anything that had originated digitally looked absolutley superb on the dome. If I were still a Giant Dome theater operator, I would be proud to have this quality of image on my screen.”

“The colors on the digital projection were much more vivid and vibrant than film and the image quality was excellent in 8K. This is a really good solution for 1570 dome theaters considering converting to digital or laser and will provide new opportunities for programming giant screen content and astronomy demonstrations.”

“To the naked eye, the brightness and contrast were very comparable as we watched different content put on-screen. The IMAX film seemed washed-out, brownish, and shaky, while the D5 looked sharp, blueish, and steady as all get-out. I was convinced of the digital system’s superiority over the film system as far as projecting traditional fulldome live-action and animated content. The IMAX manages to be slightly brighter, but the D5 won in terms of color, stability, and contrast. I’d call resolution a tie between the two, with the digital system winning an easy victory in terms of overall image quality. There was a pastoral image scanned at 3K by 4K from IMAX film. This is when my jaw hit the floor. The picture looks nice. In person, it was eye-popping, glorious, and undoubtedly among the best fulldome images I’ve ever seen. Unlike IMAX, the image went all the way back to the exit doors, completely filling the screen. My general impression after the demo was that IMAX film has finally and decisively been surpassed.”

“The GSCA is very proud to have sponsored the first giant screen comparison of 1570 vs digital on a dome and look forward to having many similar events in the future as more 1570 domes add digital systems. A number of our members said this was a benchmark moment equivalent to when 4K digital was demonstrated side by side with 1570 film on a flat screen. Even two or three filmmakers told me that after this demonstration, they are now comfortable with showing their content on a digital dome; that we are technically now there. This is indeed a valid option for theaters that want to show giant screen films and for filmmakers looking to showcase their films on the dome.”

“For theaters showing film, digital dome projection is a good step in the right direction. It provides flexibility and great fun stuff for programming. With the warping capabilities, artifacts can now be taken care of and we can get rid of distortion, which I find very interesting.”

“The split-screen comparison between 15/70 film and digital fulldome was the highlight of dome day. (Kudo’s to E&S for pulling off such a technically challenging demo). For me, this was a groundbreaking demo that instantly burned into my memory. It was proof of a very important industry development: that digital fulldome can be an acceptable replacement to 1570 film for the truly giant domes, from a quality of image standpoint. That said, the industry still has some work to do on standards and business models, and the total costs of all new digital solutions for giant domes have to be taken into consideration too, if fulldome is to realize its full potential as a replacement for 15/70 film. But this event took the image quality issue off the table, and my sense is that the word-of-mouth following the event has accelerated interest in exploring fulldome as the digital path forward for many domes.”

“Before this demonstration, I had been a skeptic of digital multi-projector systems. The digital image was very good against 1570. The colors were more saturated and intense. Unlike the film image, there was no dust, yellowing of the image, or film jitter. The Digistar image, coming from six Christie projectors, was very well matched across the entire frame with no blending issues. The 1570 image showed some severe warping issues, but the warping software on the digital system allowed the image to fill almost the entire dome.”