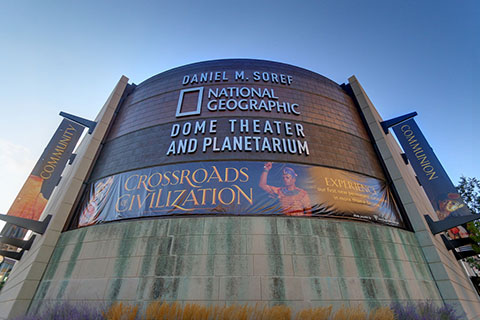 September 15, 2016 — The Milwaukee Public Museum’s (MPM) Dome Theater and Planetarium will be the first planetarium in the world to debut Digistar 6 technology on Saturday, September 17. This groundbreaking dome technology will replace the giant screen 15/70 film system, which was once the gold standard for giant screen projection.

“We’re thrilled to launch Digistar 6 at MPM,” said Bob Bonadurer, Director of the Dome Theater and Planetarium. “The stunning new imagery will captivate our audiences and get them closer to the action than ever before – whether that’s blasting off into space or trekking through a National Park. The dome imagery is crisp and life-like, it’s awe-inspiring.”

The new Digistar 6 system from Evans & Sutherland uses five 4K Christie video projectors that produce 30,000 lumens each, for a total brightness of 150,000 lumens across the entire dome hemisphere. Using auto alignment and auto blending systems, the five projectors precisely align and blend together to form a single, seamless fulldome image.

Evans & Sutherland President and COO, Kirk Johnson said, “Digistar has been a part of the MPM planetarium for many years, and we are honored that when it came time for them to replace their 15/70 projector, they looked E&S and our 8K resolution Digistar 6 system as the solution that would not only replace, but surpass the quality of their film system. We look forward to our continued partnership for many years to come.”

The addition of the Digistar system is the second phase of the Dome Theater and Planetarium revitalization project which was funded by a $1.6 million dollar gift from the Daniel M. Soref Charitable Trust. The first phase of the revitalization was the inclusion of the 3D digital system in 2013.

“As the technological hub of the Museum, it’s key that the theater features the best systems available today. We’re proud to help make this possible and to continue our support of this vital community resource,” said Audrey Strnad, trustee of the Daniel M. Soref Charitable Trust.

Planetarium shows in MPM’s Dome Theater are included with general admission. On September 17 and 18, MPM will be showing free planetarium shows as part of Doors Open Milwaukee, allowing visitors to be a part of this world-wide first for free. For information shows and times, go to www.mpm.edu/shows.