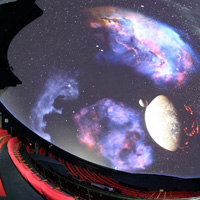 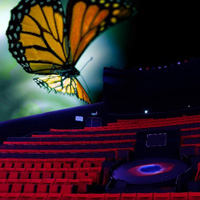 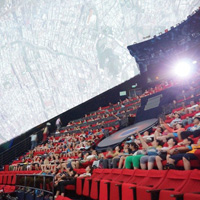 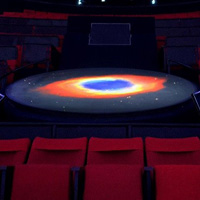 The National Museum of Natural History in Taipei is phasing out legacy technologies with a new 8K Digistar 5 system. The 8K system produces crisp 30MP imagery on the theater’s 23 meter dome produced by six Sony T-615 projectors, driven by 24 graphics computers and the Digistar 5 software.

The 8K Digistar 5 system replaced both the GOTO starball, which served the theater 29 years, and the IMAX 1570 film projector, which has also been removed from the theater. The GOTO projector will be repurposed for use in a different astronomy display area of the museum.

The Taiwan National Museum of Natural Science also found a creative use for their prior starball pit. With the space left behind, the museum printed an image on a canvas with a lamp below to light it up. The lighting underneath the canvas is controlled together with the lighting for the entry and exit, so the operator at the Digistar 5 control console can turn it on and off. It is a unique and artistic reminder of the theater’s long history.

Using the new 8K Digistar 5 system, the museum is screening exciting content that correlates with themes of the natural science museum. For example Flight of the Butterflies, and Mysteries of the Unseen World a sample of their films which transport audiences to places on this planet that they have never been before, to see things that are beyond their normal vision.

Liyu Juan, Deputy Director of Education Department of the Ministry of Education: “The museum holds many of my own childhood memories. Now the museum theater has a more realistic simulation of a dazzling sky, which will bring [visitors] a very exciting, and unique experience.”